My friend Yvette Scheltema is a product designer. She used to be an architect, until a little over a year ago, when she found herself downsized out of her position. When that happened, she spent some time trying to figure out what to do next, and she decided to pursue product design, because she is just unable to look at an object and not wonder how she could tweak it so that it would perform better or differently. And then she started toying around with paper design. Not one to do things halfway, she then proceeded to invent an object that didn’t actually exist as such, and while she was at it, she successfully patented the thing as well. And now she’s building up her own company, centered around her patented invention: the Cardle. 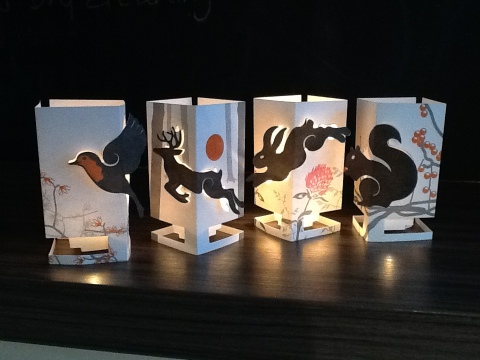 Since we’re friends, and I like to help my friends every once in a while, I helped her out with some copywriting, translation and legal advice from time to time. But, not being one to do things halfway either, I found myself working with her as an external consultant for her new company.

Putting a new product on the market requires some going out and getting things done. One of the things that need doing is attending trade fairs. Yvette asked me to accompany her to the Paper and Convenience fair in Rosmalen, the Netherlands, last year September to launch the product on the Dutch market, and I did. We spent three days on our feet, accosting pretty much everyone that passed our booth with flyers, promoting the Cardle like crazy people. And it worked: the Cardle has been selling very nicely in the Netherlands, thanks in no small measure to Denis Bégin’s (Yvette’s husband, a talented graphic designer, among other things) beautiful graphic design for the Cardle’s first two series.

But Yvette is ambitious – and me too – so the Cardle was destined for a greater audience. Some enthusiastic marketing was done, and international interest in the Cardle was expressed from countries around the world. Now, the way to reach a larger market for a product like the Cardle is to show it off on an international trade fair.

And this is why I am writing this blog post from an apartment in Frankfurt, where I am staying with Yvette while we’re attending Paperworld at the Fankfurt Messe.

Before I say anything else, let me say this: the Frankfurt Messe is enormous. Good lord: the buildings – there are 11 – stretch for miles and each building has several levels. Paperworld only occupies a few buildings, the rest is currently being taken up by ChristmasWorld. This place is so professional and efficient, the staff is kind and competent, the atmosphere is very good and the contact between the exhibitors is fun and friendly.

But more about that later. Let’s start at the beginning.

Have you ever had that dream where you walk out of your house to go do something and you’re wondering why people are looking at you funny, then you look down and you see that you forgot to put your clothes on? Right, that feeling. That’s about the feeling we had when we arrived at the Messe on the 28th of January, around 10:30 AM, to set up. We imagined we would comfortably build up our booth, then spend some time in town and visit friends later in the afternoon. After all, the fair itself would only start on the 29th. We were wrong; a mistake in the dates. The fair had already started that morning – setting up should really have been done the day before…

More than a little embarrassed, we quickly remedied the situation, and with the help of some very friendly staff members at the Messe Yvette set up the booth while the first visitors were already strolling around through the exhibition halls. Meanwhile, I took care of some administrative things and parked the car.

And so, with some slight delay, we were in business. 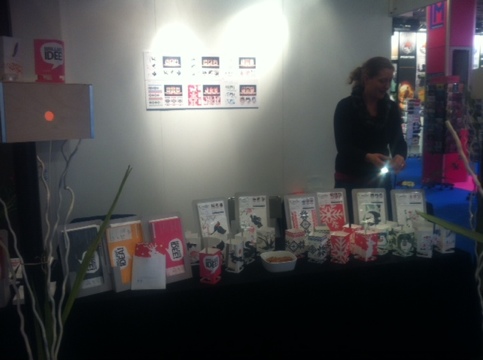 We had a very productive day after our rough start, and today was a truly excellent day: we barely had a moment’s rest. The Cardle has been doing very well so far. Distributors, wholesale companies and retailers alike are truly enthusiastic. And, as we did last time, Yvette and I are on our feet almost all the time, promoting the Cardle like crazy people (but in a charming way, naturally).
And we’re really quite proud of how lovely our booth looks! 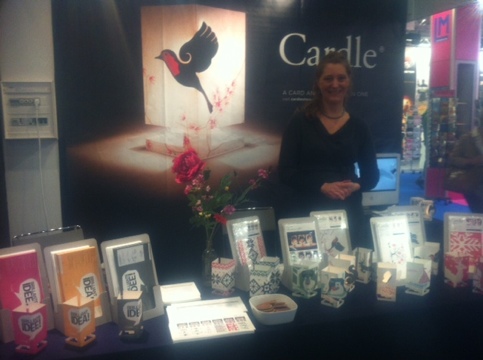 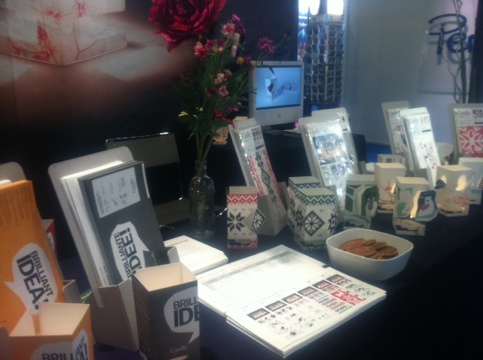 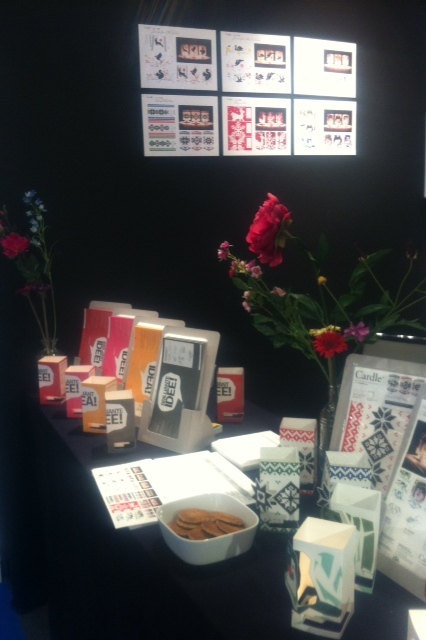 While the Rosmalen fair was a fairly Netherlands-centered affair, this trade fair is a truly international event. Exhibitors from all around the world are here showing their products. The hotels are full up with both representatives from companies displaying at the Messe and visitors, who – like the exhibitors – come from all across the globe looking for new products to sell or distribute.

Some of the exhibitors use gimmicks, and Sheepworld has used the best by far during this trade fair. Their main theme features, not surprisingly, a cuddly sheep. During the fair, they had a life size one wandering around on fair grounds. When I saw it, I had no notice but to cuddle the poor lost thing – I felt just like Bo Peep (well, the opposite really, I guess, since I found the sheep instead of having lost it, but you get the idea). 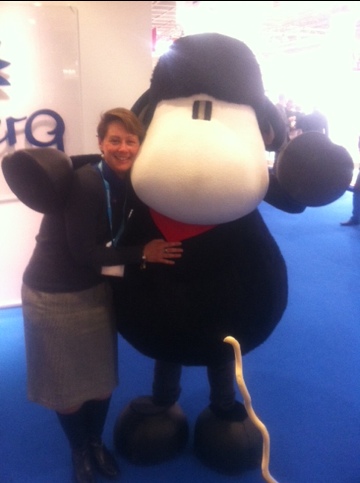 But the sheep was not the only cartoon image to escape from Sheepworld. One of their other characters is a cute version of the Grim Reaper. He has been skulking around in the exhibition hall, occasionally rather startling some of the visitors and exhibitors – which is pretty amusing to watch (I think I have a mean streak). I caught our friend on camera in a very appropriate setting: 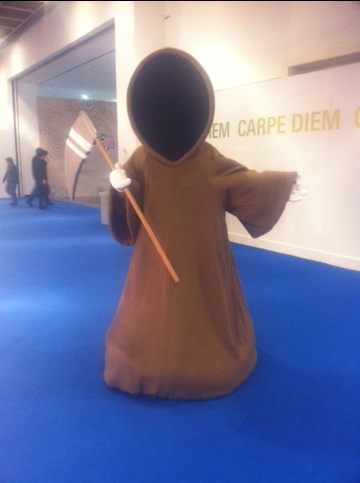 We decided that at the end of this second day at the Messe, a long day on our feet, we deserved some R&R, and so we made our way to a Chinese restaurant very near our hotel. I discovered it purely by coincidence on the night we first arrived; it’s tucked away behind the station on Westendstrasse 1 and doesn’t really advertise itself very clearly. But once you enter the restaurant premises and head down the steps, the most delicious scents float up to greet you. The service is genuinely friendly and the food terrific. If you should every find yourself in Frankfurt and hungry for good Chinese food, go check them out. 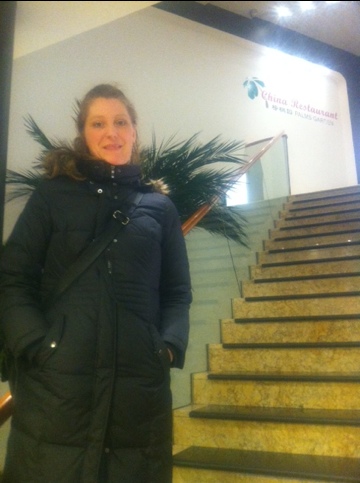 We’re halfway through the fair now; there are two more days to go. Then, a visit with friends in a nearby village and a long drive home.

Error: Twitter did not respond. Please wait a few minutes and refresh this page.